Teenage years are volatile ones and Kids in Crisis (KIC) has been helping teens in trouble since it opened in 1978 as a shelter for runaways. Since then the nonprofit organization, which is honoring its fortieth anniversary this year, has grown substantially to provide a range of services for kids of all ages. In fact, the group has helped more than 143,000 children and teens (and their families) since its inception, and it’s now the only agency in the state that helps children from newborns to teens. Whether there’s a teen in trouble or a four-year-old who needs services because Mom is homeless or someone in the family has mental health issues, KIC is there for them around the clock.

“It’s really humbling for us that families allow us to be part of their lives at a very critical time in their lives,” says Executive Director Shari Shapiro, who has been with the group since 1980. She recalls how KIC expanded over time to its current role, touching so many families in the process. “We started to ask, ‘How can we grow and meet the needs of this population without necessarily bringing them in for emergency care? Is there a way we can get out to them in the community?’” This thinking gave birth to the Outreach program, where KIC was sending staff out 24/7 responding to calls in the community, an effective way to help keep kids in their homes. In the late ’80s, the group saw a demand for assistance for children under twelve, and in 1993 KIC opened its emergency Crisis Nursery program.

Today many Greenwich residents may not even realize that their kids are being served by KIC. Through the Teen Talk program, a cornerstone for the agency, KIC sends full-time social workers to Eastern, Central and Western middle schools and other schools throughout Fairfield County where they’re available to talk with kids, augmenting the school staff. KIC social workers participate in school health classes, and they’re around at the cafeteria and at weekend events. They can also make house calls after school. “They try very much to be a part of the school community,” says Shari.

The agency also runs SafeTalk, a program where volunteers visit the elementary schools to teach kids through role play about bullies, strangers and ok/not ok touch. SafeTalk helps build resiliency in children so that they can protect themselves from potentially dangerous interactions with peers, strangers and known adults.

In spite of these valuable and much-needed contributions, KIC’s funding from the State Department of Children and Families was cut in 2016, forcing them to reduce the number of beds at the Teen House from twenty to twelve. “We’d like to get back to full capacity through increased support,” says Shari. kidsincrisis.org

In just the past five years, KIC has touched the lives of so many in our area. Here’s a snapshot.

505
Children who have benefitted from the assessment, stabilization and treatment planning provided during their emergency shelter care

3,697
Middle and high school students who have received counseling through TeenTalk at eight schools throughout Fairfield County

14,867
Nights of safe shelter care that have been provided

20,143
Young people (ages six to ten) who have benefitted from the SafeTalk program, helping them to live “Safe, Strong & Free.”

+ Volunteer to help with art therapy or sign up to bring meals to the Teen House. 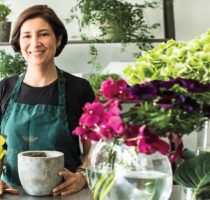