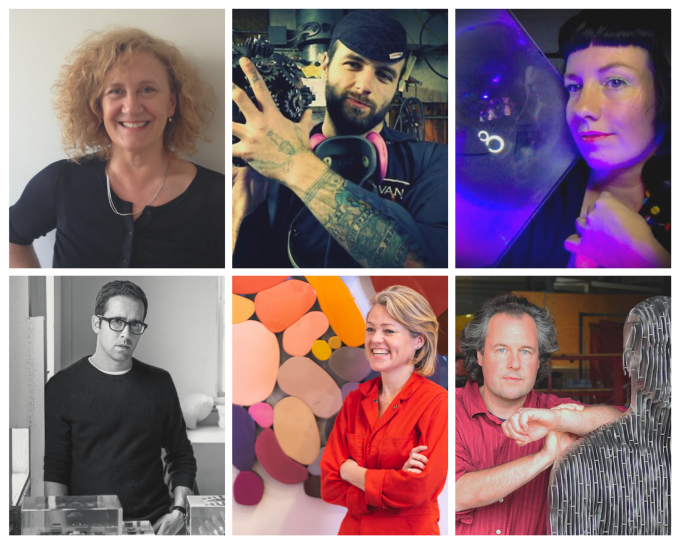 From Free for members, $20 for non-members

The mystery is as ineffable and wondrous and old as time: What inspires the artist to create? What’s the guiding creative power that flows from the brain of the artist, slowly but surely informing color, texture, medium and message along with concept, design and execution of a great work of art?

For the Greenwich, CT-based Bruce Museum, a century-old nonprofit institution of art and science, one of the clues of the mystery is abundantly clear. On Tuesday, August 10 at 7pm, via Zoom webinar, the Bruce Museum will present Method to Their Muse: Meet Major Artists Inspired by Science, a nationwide panel of creative artists whose muse happens to be nothing less than the scientific method itself.

Method to Their Muse is the latest installment of the Bruce Museum’s acclaimed speaker series Bruce Presents: Thought Leaders in the Fields of Art and Science, which has presented nearly 20 thought-provoking panels, speakers and conversations both in person and online since 2019. Support for these programs featuring thought leaders in art and science is generously provided by Berkley One, a Berkley Company, Connecticut Office of the Arts, and Northern Trust.

To join the Bruce Museum for this online, live-streamed Zoom webinar, visit www.brucemuseum.org and click on the Reservations button to sign up. Tickets are free for Bruce Museum Members; $20 for non-members.

Bruce Presents producer and panel moderator Leonard Jacobs conceived Method to Their Muse after noticing how fascinated and curious the museum’s audiences can be when it comes to the intersection of art and science. “There is aesthetic joy and incredible beauty to be found in all that the natural world can reveal—especially if our eyes and minds are truly open to seeing it,” Jacobs said, in a statement.

Bruce Museum COO and Managing Director Suzanne Lio added, “It’s really about ways of seeing. To a scientist, the human body, microbes, even physics may be about form and function, higher math. To an artist, however, these very same things are dynamic pathways into artistic adventures. We’re so honored to present a group of major artists for whom scientific inquiry and discovery is the stuff of creative inspiration. To us, it really underscores our mission—‘to promote the understanding and appreciation of Art and Science to enrich the lives of all people’.”

The panelists for Method to Their Muse: Meet Artists Inspired by Science are:

Annie Cattrell was born in Glasgow and studied Fine Art at Glasgow School of Art, University of Ulster, and Glass and Ceramics at the Royal College of Art. Her practice is often informed by working with specialists in neuroscience, meteorology, engineering, psychiatry and the history of science. This cross-disciplinary approach has enabled her to learn about cutting-edge research and in-depth information in these fields. She is particularly interested in the parallels and connections within these approaches in both art and science. Solo exhibitions: Source for An Lanntair in the Outer Hebrides, Transformation for the Ruskin Gallery, Cambridge; Fathom, Pier Art Centre, Orkney; Anne Faggionato Gallery, London; From Within at The Faraday Museum at the Royal Institution, London; Inverness Museum and Art Gallery. Her artworks have been shown nationally and internationally: Medicine and Art (imagining the future for life and love), Mori Museum, Tokyo; Out of the Ordinary at the V & A in London; Hybrid, MIC Auckland; Not Nothing, curated by MUKA, Antwerp; Invisible Worlds at Freiburg Kunstverein, Germany; The Body, Art and Science, National Museum, Stockholm; Einfach Complex at Museum Gestaltung, Zurich; Paper Cuts, Fredericke Taylor Gallery, New York; On the Edge, Humboldt University, Berlin. Cattrell is lead artist for the new world-leading UCLH Dementia Research Institute in London.

Ivan Iler is a Michigan-based artist passionate about creating works of art that breathe movement and life into metal. Excelling in various mediums like metal fabrication, sculpting, carving, engraving, blacksmithing, painting, leathersmithing, mechanical design and more, Ivan is a true jack of all trades, and a master of many. He has created many large public sculptures, though his true passion is to fuse his deep understanding of kinetics with his art in order to bring his unique visions to life.

Rosa Menkman’s work focuses on noise artifacts that result from accidents in both analogue and digital media (such as glitch and encoding and feedback artifacts). The resulting artifacts of these accidents can facilitate an important insight into the otherwise obscure alchemy of standardization via resolutions. In 2011, she wrote the Glitch Moment/um, on the exploitation and popularization of glitch artifacts (published by the Institute of Network Cultures), co-facilitated the GLI.TC/H festivals in both Chicago and Amsterdam, and curated the Aesthetics symposium of Transmediale (2012). She has also been part of the curatorial team of Sonic Acts (2016-2017). Between 2012-2014, she curated four exhibitions that illuminated the different ecologies in which glitch (art) developed. In 2015, I initiated the institutions for Resolution Disputes [i.R.D.], a solo show at Transfer Gallery New York. In follow-up exhibitions, Behind White Shadows (2017), Shadow Knowledge (2020), and Im/Possible Images (2021), she developed and highlighted the politics of resolution setting further, which resulted in a second book titled Beyond Resolution (i.R.D., 2020). In 2019, she won the “Collide,” Arts at CERN Barcelona award, which came with a three-month residency. From 2018 to 2020, she had a Vertretungs Professorship Neue Medien & Visuelle Kommunikation at the Kunsthochschule Kassel. Since then, she has worked as artistic researcher at the New Media department of the KHK.

Fabian Oefner’s visual expression of the invisible effects of the natural sciences and the properties of time is the genesis of his photographs and sculptures. His art forms encourage us to conceptualize in new ways, and to accept that art and science do not exist on opposite ends of the academic spectrum but rather inform each other in tangible ways. Oefner was born in 1984. He grew up in Switzerland and currently works and lives in Connecticut/USA. Art is his lens to experience—from his preliminary studies at the Basel University of Art where he studied painting, photography, typography and art history—to his Bachelor of Arts in Product Design at the University of Basel. In 2013, he founded StudioOefner. The profound intention of Oefner’s art defies description. His explorations into the ephemeral poetry of time and the natural world stop us, allowing us to see the invisible, while provoking us to wonder about the myriad magical moments we do not see, while never considering the artist’s process that created them.

Klari Reis uses the tools and techniques of science in her creative process, constantly experimenting with new ways to apply materials and methods. She is driven by curiosity and her desire to explore and document the natural and unnatural with a sense of wonder and joy. The artist currently works in San Francisco, close to one of the largest concentrations of life science companies in the world. Klari takes advantage of this proximity to collaborate with local biomedical companies and thus receive inspiration from the cutting edge of biological techniques and discoveries; this context grounds her artwork and lets her authoritatively explore the increasingly fuzzy line between the technological and the natural. Klari's artwork work is in the collections of Genentech, Royal Caribbean Cruise Lines, Google California and Colorado, London's Intercontinental Hotel, Kaiser Permanente Redwood City and San Francisco, The Peninsula Shanghai Hotel, Stanford University Medical Center Hoover Pavilion, Microsoft Cambridge UK, Clemson University's Life Sciences Facility, Genentech, The Chan Zuckerberg Initiative, Merck Pharmaceuticals, and The Gates Foundation.

Julian Voss-Andreae, a German sculptor based in Portland, Oregon, is widely known for his striking large-scale public and private commissions often blending figurative sculpture with scientific insights into the nature of reality. His sculptures are frequently shown at international art fairs and galleries and are included in major private collections all over the world. His public artworks can be found in diverse collections including Google, Maryhill Museum of Art, Washington Gladden Social Justice Park, Château de Vullierens Sculpture Park (Switzerland), and Instituto Açoriano de Cultura (Portugal) as well as in numerous universities and institutes such as Rutgers University and The Scripps Research Institute, CalTech, Georgia Tech, Texas Tech and the universities of Vienna (Austria), Minnesota, Washington, and Queensland (Australia) among others.  Voss-Andreae’s work has been featured in print and broadcast media worldwide and videos of his sculpture have gone viral with tens of millions of views. Prior to his art career, Voss-Andreae studied quantum physics and philosophy at the Universities of Berlin and Edinburgh and did his graduate research participating in a seminal experiment in foundation quantum physics at one of the world’s most prestigious physics research labs at the University of Vienna. His expertise in diverse fields of science and a deep passion for the mysteries of quantum physics have been a continual source of inspiration for his work.