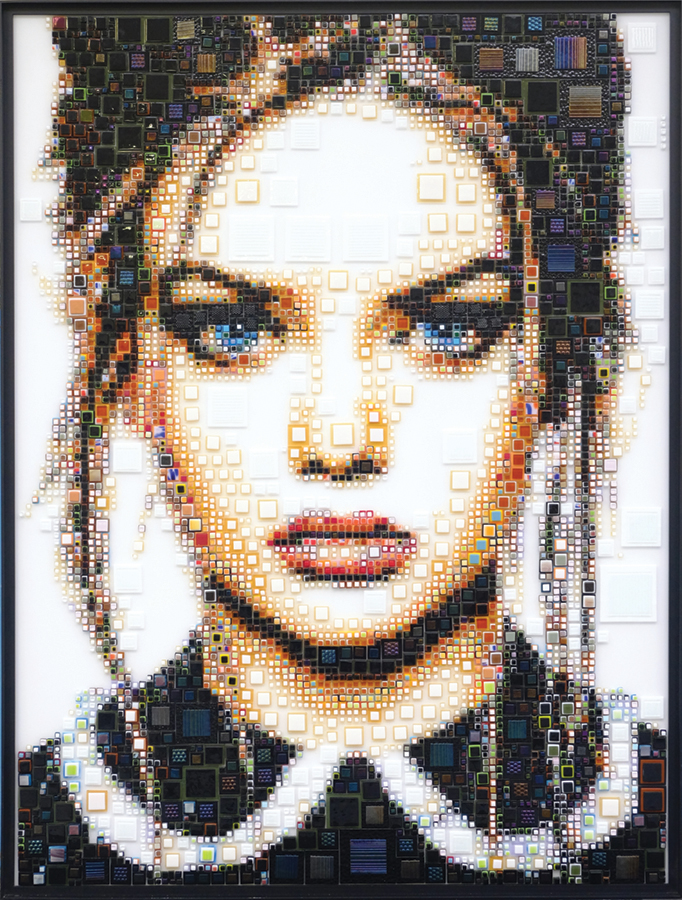 Isabelle SCHELTJENS portraits in glass are simply put – beautiful.  Their effect is a candied aesthetic, shimmering with light and buoyant energy.   They exist as a compelling commentary, meticulously constructed, and ultimately breathtaking.

Inherent in Scheltjens’ most clever portraits is her determined focus on its architecture - the elemental structure of the face.  Her employment of material, glass, the assemblage of their colored fragments, distinguishes her works, treating the viewer to a singular kaleidoscopic experience.  These colorful geometric compositions are stylized, methodical abstractions. Her alignment of blocks of color to construct an image demonstrates mastery in optical effect.

Owing to the direction and evolution of her work to Yvaral and Close, both through their own works “Reinvigorated the Portrait” by their insistent departure from its classical confines. They brought about a seismic shift in contemporary art and its vocabulary. Their pixelated approach, borne of a digital age, concentrated, as Scheltjens work now does, on the facets of facial construction. Asserting a bold and novel perspective with maximal visceral effect, this approach along with the prominence of the scale of their works were key to its influence.  Scheltjens’ colorful geometric compositions are a unique translation of such stylized and methodical abstractions. Scheltjens’ employment of colored glass, meticulously charted and placed, overlaid and fused, are assembled into an orchestrated anatomy.  Her recognizable subjects are revered personages, offering a nod to celebrity, voyeurism and nostalgia. These stunning creations assure the engagement of its audience, as it ignites their curiosity and awe.

Scheltjens resides in Belgium. Her work is collected worldwide.