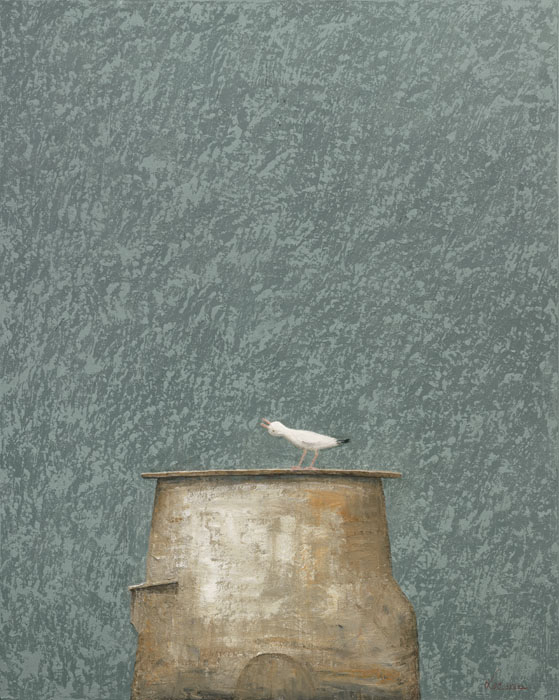 LEE’S works are mythically driven and influenced by his Asiatic roots.  Primitively drawn they evoke a palpable yet sublime reverence for quietude and reflection.  His work floats, as music, above the fray of a bustling and chaotic world.  And possess a unique and ethereal beauty.  There exists within the body of his tableau a wistful reminder of the sweet dreams of youth. Often infused with symbolic imagery, as in the four elements LEE depicts life’s cycles from its decay to regeneration within mixed media applications. His surfaces are built-up at times with plaster allowing for a relief-like quality. At times they are tactile and highly stippled, as in his fields of flowers. Evocative of Chinese cinema, the frames to his canvases are infused with a splendor borne of the wistfulness as founded in dreams and imbued with a unique and often Zen-like countenance.   His newer images sit as still and silent totems. They are of solitary rooms with only a bed, or chair to furnish its space. LEE draws you into these interpretative theatres.  His compositions speak softly yet resound deeply.  His deliberate palettes, vacant spaces and child-like imagery speak to the universality of fables once told and to the mystery of its discernment.

Born in a small village in South Korea in 1959 LEE has received his degree in art from the University of Seoul. He moved to France in 1995 and received an additional degree in art from The University in Paris. He has since enjoyed a successful and celebrated career. Earning many awards, LEE has exhibited worldwide, and his work may be found in both public and private collections. He currently resides between Paris and  Korea.