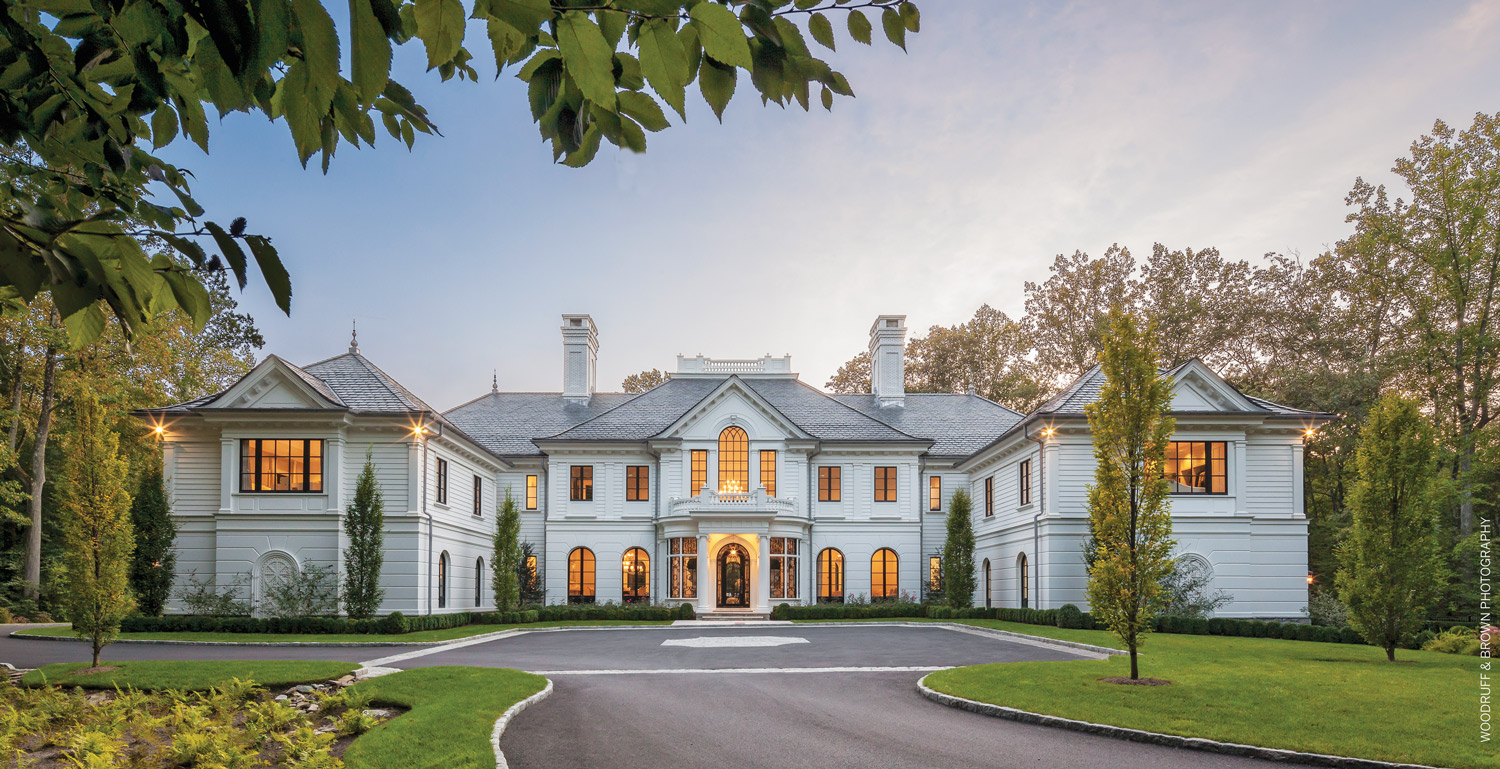 If Billions’ Bobby Axelrod were more country boy than urban animal, he might once again shift his acquisitive gaze toward the gilded shores of Fairfield County and land on this sprawling manor in Greenwich. Here, on these twelve acres in Conyers Farm, Axe would enjoy not only the spartan, high-voltage gleam to which he is accustomed, but also the vast, temperature-controlled storage for his Bentleys and Bugattis.

Dave LaPierre of Robert A. Cardello Architects of Greenwich and South Norwalk, the lead architect on what would become this 14,000-square-foot summer residence for a family of four plus staff and hounds, had to channel the “You get one life, so do it all” mentality. The feat was not one that just any architecture shop could pull off. In fact, LaPierre’s client, an owner of many homes that have required the services of an architect, says she interviewed twelve firms before hiring LaPierre and the team from Cardello in 2015. She added the firm to her list after seeing its work in an interiors magazine.

“He really did exactly what I wanted,” she says over the phone from Jupiter Island where Cardello Architects is now renovating her primary residence, which was destroyed in a fire the family was lucky to escape. “It’s so important to have an architect that listens to you.” (Post-renovation, the Jupiter house will be even bigger than this one.)

Soon after the contract was signed, LaPierre and his team found themselves drafting schemes for the renovation of the existing Adirondack-style house that stood on the lot the client had bought. The objective was to conform to the Shingle-style vernacular of the area, replete with varied roof-lines and assorted pop-outs. But the lack of uniformity did not appeal to his new clients. “They like symmetry,” says LaPierre of his clients’ organizing principle. “And they didn’t want any clipped ceilings.”

Several sketches and elevations later, he and his team worked their way into a solution that won approval: a majestic Georgian disguised as a limestone château. On the ground level, the exterior is clad in a composite concrete scored to replicate stone blocks; upstairs, fiber cement siding mimics clapboard.

Shaped like a squared-off U that embraces a central parking court, the house features two substantial wings. The glass entry, which bows like a birdcage, is the midpoint where the house could fold into two identical halves.

Inside, LaPierre designed a catalog of finely crafted details. A sinuous, wrought-iron staircase climbs to another realm, with a pattern of scrolling oval loops and balusters bejeweled with polished-nickel knuckles. Its mahogany handrail features a lustrous piano finish.

Gracefully arched windows are matched by arched doorways that establish scale and proportion along a first-floor axis where each opening is marked with a double-step keystone that solidifies its elegance. The corridor serves as the central thoroughfare that connects two destinations that are essential, as the client sees it, to a family that enjoys impromptu gatherings with friends of many generations.

At one end is the in-home movie theater featuring a soft and ample sectional, automated black-out shades, and a concealed projector and screen, the size of which rivals a Super Bowl Jumbotron. A shiny Macassar ebony coffee table, wall-mounted wine rack with capacity for about a hundred bottles and millwork, including the shiny mahogany crown moldings and beams in a spectacular coffered ceiling, make this anything but your run-of-the-mill in-home theater.

In the opposite wing of the house, there is an open chef’s kitchen with a massive marble-topped island beneath a chandelier inspired by a design one could likely trace to Murano in the mid-1900s. Adjacent to the kitchen is a sunny relaxation corner (with seating for ten or more); it features floor-to-ceiling draperies that showcase transom windows with decorative grillwork that riffs on the theme set by the staircase out front.

In keeping with their penchant for compartmentalized spaces, the client had altered LaPierre’s original scheme for an open-plan kitchen-den space by requesting that a wall be built between them. But once the wall was up, they realized they’d not only interrupted the flow but also blocked the view to the pool house in the distance. So LaPierre took it down, letting more light into the space.

His and hers garages accommodate a total of eleven cars and are equipped with a car lift that can relocate cars to the basement-level. On this level you’ll also find a Vegas-worthy gaming hall equipped with a simulated driving range, poker table, ornate billiards table, commercial-scale marble bar and a gallery of vintage arcade games (Wizard of Wor and Pac-Man—check, check).

Another not-insignificant programmatic innovation built into the architecture? Knee-high dog gates that slide into the wall like a pocket door and feature tiny spindles with nickel knuckles to match the front staircase.

Bruce Bierman of New York-based Bruce Bierman Design has worked with this client for twenty-five years and thus knows the importance of accommodations for dogs and humans alike. “We joke that only one of us needs to be in a meeting because we agree on pretty much everything,” says the designer of his relationship with the client.

Bierman’s confidence derives from a history of working with this client on the design and decor of at least five homes, including the one in Florida currently being rebuilt. He recalls a moment in one of their first meetings more than two decades ago, when, after having arrived in his office, they sat down and realized that Bierman’s stereo sound speakers were positioned perfectly at ear level, evidence of the early-adopter’s conviction that technology is a significant component requiring substantial attention in a thoughtfully designed home. Bierman says the husband, impressed by the sound quality, said, “I can work with him.” The affirmation kicked off a collaboration predicated on mutual respect and trust. Of the wife he says, “She’s incredibly hands-on. She could be a project manager.”

Over time Bierman has watched his client’s tastes migrate from a very traditional sensibility to one that is more transitional and modern. Still, he prides himself on being able to reassign pieces from one home to another either by refinishing or reupholstering. In this instance, the living-room tableau includes two chairs, one upholstered, one wood-framed, that were brought from the client’s previous house across town, tuned up and then replicated so that each now has a mate.

On his long list of interior contributions are highlights like the aforementioned Murano-inspired kitchen chandelier, the Macassar-ebony coffee table, and the living-room carpet with ombre shading that gives it the feel of something deeply organic despite its very geometric pattern.

“I’ve learned to listen to clients so that I understand what they’re really saying,” Bierman says. “When I make a presentation, I watch how their faces react. We always think that other people see exactly what we’re seeing, [when they could be seeing something different]. So it’s about listening.”

Grounded by dark floors and black mahogany window casings—the grillwork on the front windows is removable for cleaning—the color palette consists of neutral whites, blacks, grays and flecks of silver. Throughout the house Bierman placed crystal and glass objects and ornaments—candle-holders, vases—silver-leafed lamps, and pieces of interest like the mirrored credenza by Lorin Marsh in the master bedroom and the contemporary demi-lune sofa covered in lilac velvet in the daughter’s bedroom. (Bierman says he’s not the source of the small-scale shiny King Kong sculpture by Parisian pop artist and sculptor Richard Orlinski, which guards the living room from atop one of a set of matching coffee tables.)

Inside the turns of the back staircase, Bierman installed a custom chandelier that stretches the vertical distance of three stories, delicate, thread-like chains studded with crystal and spun-glass bubbles of light.

If symmetry is one of the client’s guiding principles, precision is another. It may be most apparent in the gentleman’s dressing quarters of the patriarch of the house. LaPierre says that the carpentry had to be cut more than once to match sartorial specifications. The requirement included twenty or so square cubbies tailored exclusively for stacks of folded golf shirts each exactly an inch away from the cubby wall; open bays for suits and sports jackets measured to the length of the wearer’s sleeves; a bespoke belt rack; a retractable valet rod installed at a custom height; a built-in bureau for shoe horns and lint removers, among other essentials.

The lady’s dressing room is reminiscent of a couture showroom. Open closets, divided by broad aisles conducive to shopping one’s own wardrobe, brim with furs and chic evening wear and a rack dedicated to nothing but black slacks. The catwalk can’t be far.

As LaPierre marvels at this in-home boutique (it encompasses more than 700 square feet, not including the sitting area and master bath), he gestures toward a wall of mirrored doors and pulls at a handle. The door is locked.

“Behind these doors are the shoes,” he says and then points above his head. “Up top are the bags.” If only we had the key.