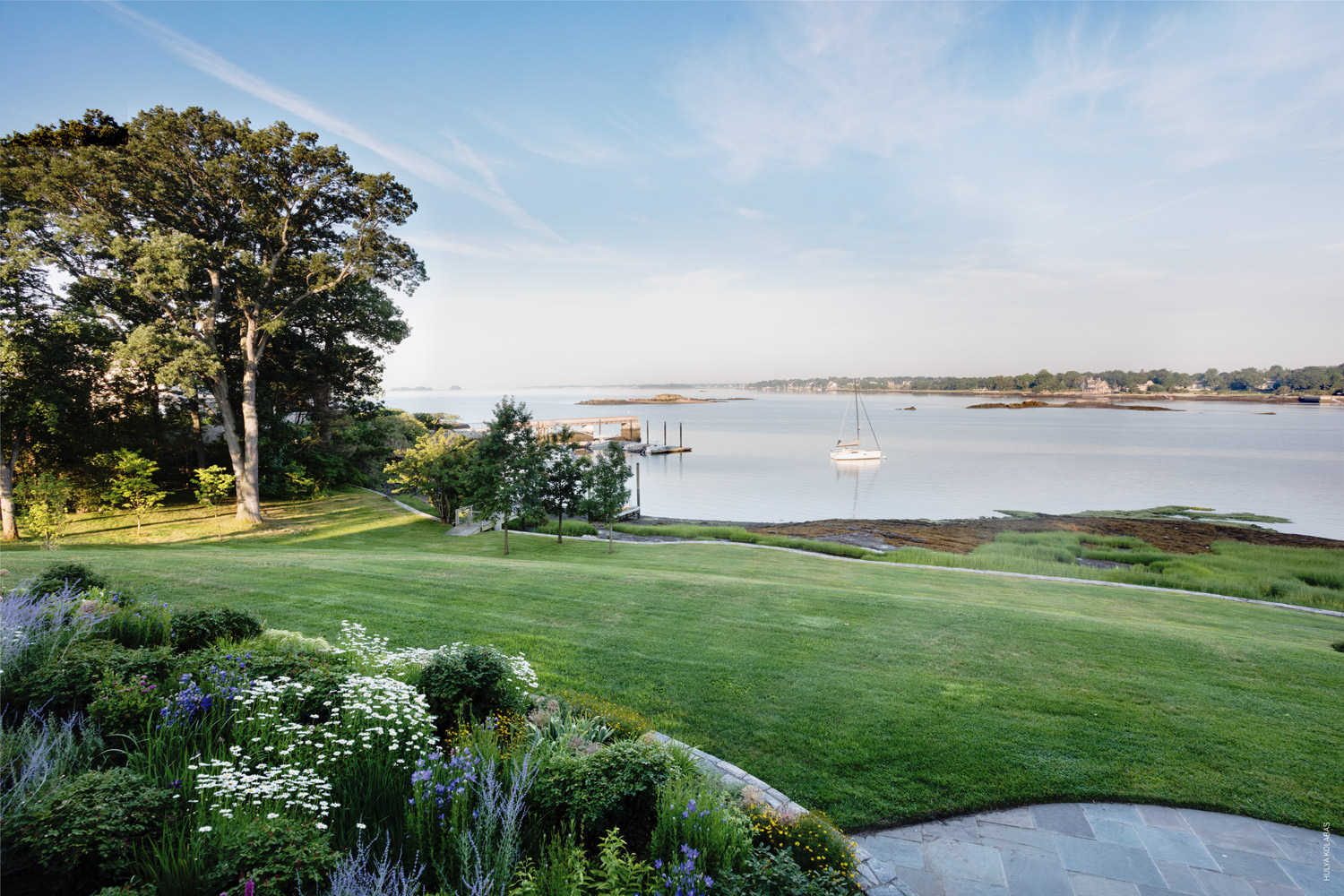 Standing on the back terrace of her Riverside home, above her lushly flowering garden, Monika Heimbold watches a flotilla of sailboats skim the sapphire waters of the Sound. The scene, of a garden overlooking a sparkling waterway with a facing shoreline in the distance, reminds her of her native Sweden, especially Stockholm, where she grew up.

“It makes me think of my favorite estate, Waldemarsudde, Prince Eugen’s home on the water, which is now an art museum,” says Monika, who retired from a career in social work and devotes her time to educational and cultural projects around the world. She has just finished her morning swim off her dock. Although she’s seen it thousands of times, she’s still awed by the view from the home she shares with her husband, Charles Heimbold, the former American ambassador to Sweden.

They had lived in Riverside for almost thirty years and raised their four children in a delightful old carriage house when they saw this hillside property in 1998 and decided to build a home overlooking the water.

Monika begins to talk about the extensive flower garden that borders a rolling lawn perfect for somersaults—an activity perfected by her five grandchildren. But she stops herself. She wants to wait for Susan Cohen, the landscape architect who designed the garden. When Susan arrives, the story continues. Monika and Susan have known each other as Riverside neighbors and friends, as well as client and designer, for more than forty years, and they agree that working together is easy and fun.

“Susan designed the landscaping at our first home,” says Monika, “and she was with us on the day we first saw this property.” Because this site reminded Monika so much of waterfront Stockholm, she subsequently invited Susan to travel to Sweden with her to study the gardens there for inspiration.

Working in collaboration with the Heimbolds’ architect, Robert Lamb Hart, Susan helped to site the house and to create the landscape features as well as the planting plan. The new house stands on the original site of Walhall, one of Greenwich’s great estates. It was built between 1912 and 1914 and demolished in 1954, when the property was broken into smaller lots.

There was special pleasure for the Heimbolds in building a new home here with a “clean slate for the landscaping,” says Monika, who presents a snapshot that shows the construction work in progress with not a tree or shrub in sight.

Susan adds, “Monika and I worked closely together, so the results are exactly what she wanted.” For example, “there wasn’t much flat space on the property,” Susan says. “So we revised the site plan and moved the house over by ten feet to create a flat lawn for the children to play on.” That lawn, which is defined by a curved retaining wall and five flowering crab apple trees, became a focal point for family events, including
children’s birthday parties and a wedding.

Monika shows an old photo that reminds her about the necessary dynamiting during construction. A large section of rock had to be removed so the foundation of the three-story, shingled house could be erected. “We had to dig down seven feet,” she says. Even so, the house rises above its neighbors. After a short discussion, Susan and Monika agree that the site is the highest in Harbor Point.

Early on, Monika and Susan decided that the property called for one grand garden instead of a series of smaller bouquet spaces. Susan tucked this garden below the back terrace, where it is also visible from the water. “It gets wonderful sun, and in the winter when the ground is bare, you don’t see it from the house,” she says. “We designed the depth of this garden, front to back, to equal the height of the house, in proportion to the architecture. This garden depth—over twenty feet in some areas— allows room for a great variety of flowering plants, so in every season, the garden looks lush and colorful.”

Monika adds that she enjoys seeing it as she walks back from her swims and says that people who view it from their boats often compliment her on it. She chose the garden’s flowers from Susan’s lists of suggested plants, selected for a long season of bloom in a color scheme of pink, blue, purple and white, punctuated with yellow accents.

Some of Monika’s favorite flowers are the roses: pink Bonica and yellow Knockout, which bloom most strongly in June and then rebloom later in the season. She also loves her pink Sarah Bernhardt peonies and the dark blue iris that fill the border, along with blue baptisia, purple salvia and allium, nepeta and the fluffy chartreuse blooms of lady’s mantle.

In July, large clumps of Becky shasta daisies are the glory of the garden, along with their companion plants: clear blue balloon flowers, soft blue Russian sage, the delightful geranium Rozanne and yellow coreopsis. The flowing habit of Japanese fountain grass adds a softening grace. In recent years, dahlias have been added, and these provide summer charm and touches of vibrant color.

“I love the hostas and the white lilies,” Monika says, adding that the small Scandinavian-style bench under the Kousa dogwood tree, which blends with the shrubbery, is one of her favorite spots.

The Heimbold garden, which was on the 2018 Greenwich Botanical Center Tour, also includes an often-used spa. In the front of the house, the planting scheme is quiet and green. For instance, one courtyard wall wears a leafy coat of euonymus Manhattan that rises to an architectural band below the roofline. A pair of star magnolias flanks the doors to a breezeway, and the other major plantings—of azaleas, rhododendrons, holly and boxwood—offer a variety of textures. Sam Bridge Nursery planted them along with the new trees and shrubs on the property.

In the center of the entry drive is a grove of multistemmed white birches, which are important to Monika. “There are so many birches in Sweden,” she says, adding that they remind her of her birthplace. Monika, a cofounder and long-standing board member of the World Childhood Foundation, USA, and an executive trustee of the American Scandinavian Foundation, says that guests—especially those from Scandinavia—often remark on the beauty of these trees. At one dinner event held here, Queen Silvia, the founder of the World Childhood Foundation, was delighted to see this touch of Sweden in Riverside.

When Monika isn’t in her garden, she’s looking at it from the inside. The house includes a Swedish-style cupola of her own design that encloses an interior winding staircase. Sitting in her sunny-yellow living room sipping lemon water, she can see Long Island Sound framed in the picture window like a postcard. A collection of paintings in gilded frames reinforces the view.

“Sweden is all about nature,” she says. “That’s why several of our paintings are by Bruno Liljefors, who painted landscapes. We are a sailing family, so we have many paintings of boats, too.”

Every spring, Monika sits down with Susan and with Cora Burnham of Sanctuary Garden Design, who maintains the garden. “We talk about the flowers that need to be added or changed, because we like to keep the garden looking beautiful throughout the seasons,” she says.

Taking this tour of the garden reminds Monika and Susan how much they like spending time together. They discover they are both free at 4 p.m. and agree to meet for tea.