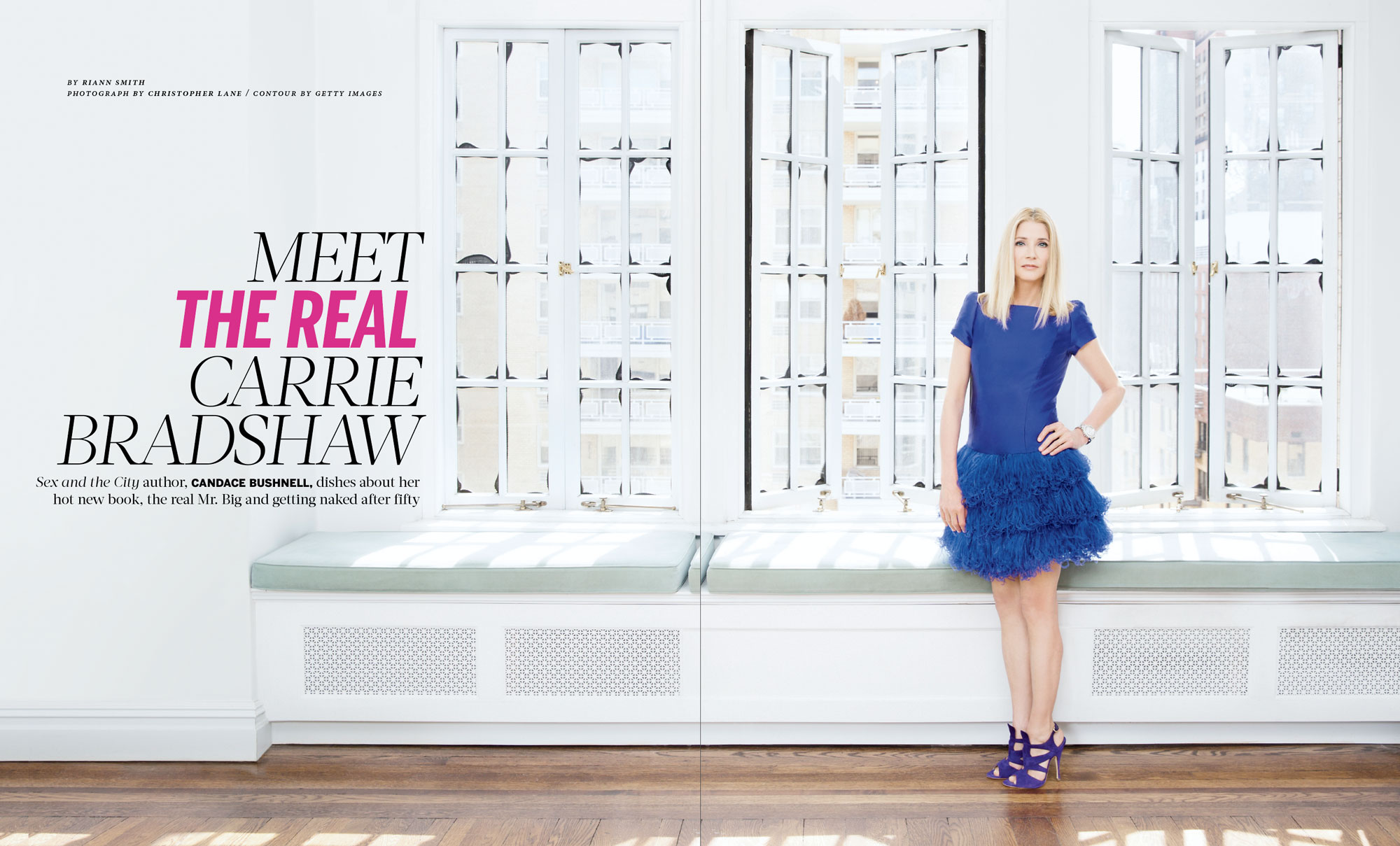 Before Carrie Bradshaw was written into existence, there was a sexy blonde scribe pounding Manhattan’s pavement in search of love—or its lustiest approximation—armed with nothing but a Cosmo, a computer and couture. We are of course talking about Candace Bushnell, the original Carrie, whose New York Observer column-turned-book Sex and the City became arguably one of the most era- defining television series in history. Over twenty years later, Candace’s new book, Is There Still Sex in the City? (also in development as a TV series) delivers a new set of hilarious and heartbreaking truths to its audience—this time about divorce and dating after fifty in a Tinder- hindered world. You won’t get Carrie, Miranda, Charlotte and Samantha 2.0 in this version (sorry, diehards), but with Bushnell’s Botox-needle-sharp observations and an equally engaging crew of girlfriends, you’ll be too glued to your Kindle to care. We caught up with the Connecticut native (who knew?) for a little sip and spill.

Tell us about your new book, Is There Still Sex in the City, that you’ll be in Greenwich to promote in September?
CB: It is about dating again after not dating for a while, which I think is a situation that a lot of women find themselves in. So many of my friends were all of a sudden single. You get married, you have kids, you kind of do it all right, but then something happens…for half the people it does work out. But there are still a lot of women who get divorced in their fifties. The kids are grown, and they’ve gotta start dating again. Women go through these different phases, trying to find who you are again not in the context of marriage and kids. Nobody is expecting to be single in middle age.

What is the biggest difference between dating in your thirties and forties like we watched Carrie and Co. do versus dating at fifty-plus?
CB: Generally, if you’re dating in your thirties or forties, you’re looking to start a family. I call it the reproductive lifestyle. Once you have a kid, you’re on a conveyer belt, that’s your lifestyle. You’re with people who have kids and everything is about the kids, and it really gives you a purpose. But at the end of that conveyer belt, now the kids are grown up and, ‘Oops, suddenly my marriage doesn’t work’ and ‘Uh-oh, I’ve fallen off the conveyer belt and where am I?’ The second time around, people are looking for different things. There are a lot of people who aren’t necessarily looking to make a family because they already have a family. They’ve got the kids. That’s what makes this time so different. It’s a time of exploration but also can be a time of surprising challenge, because you kind of have to deal with death, like the loss of a parent. That’s really what it is, it’s dating and death! It’s like this middle-aged madness.

The new nervous breakdown…
CB: So true. It’s a time when people often will briefly fall apart. It used to be a nervous breakdown that men would have in their forties, but women weren’t allowed to have a “middle age.” It’s almost like a rite of passage. Things get shaken up and everything’s up for grabs, and that’s what the book is about—navigating that passage.

Who is doing the shaking up, women or men?
CB: Statistically, it’s the women. It’s a marriage where they start off with the best intentions. These are marriages where you think, God, they were such a great couple. They were so in love and they’ve got a great wedding story and two great kids and they’re both really good people and they have friends, and then something happens and it just falls apart. It’s kind of not really anybody’s fault, but they just really grow apart and sometimes it can’t be fixed. For women, a lot of them are staying in the marriage and then they realize, This is my last chance at a new life. That’s how they feel. Then there are the women whose husbands dump them in really twisted ways. I’ve had a couple of friends who married really rich guys and have gotten dumped. The richer the guy, the worse, in a way, it’s going to be. They cut you off, it’s like you’re dead. You see people really suffering, and all of this stuff is a big blow to the ego. These are the themes of the book and I’m excited about it. It’s an interesting time.

How is dating after divorce?
CB: After I got divorced, everyone was like, ‘Oh you’re going to start dating again in six months.’ Well, you do that, it’s a nightmare. It’s like heartbreaking, you will make every rookie mistake because you probably haven’t dated in fifteen or twenty years. You haven’t had to think, I haven’t had to take my clothes off in front of a stranger for twenty years. Now you have to think about it. It’s terrible! All these funny situations that we’re in again, but all of this is combined with aging and all those other ‘fun’ things that happen in midlife.

How do you think the dating landscape has changed since the advent of Bumble, Tinder and other dating apps?
CB: I wrote a Tinder story about it in the book and I found it depressing. Because people do see that there’s a commodification of the person, and that just feels like it’s bad for the soul, you know? Because it’s like we are more than the boxes that we tick off, and people find it frustrating to live in that space. Those are my observations. Now, do people have great success with online things? Yes, they do, but it also seems to be very demoralizing.

What have you found to be the most successful mode of meeting men in this passage?
CB: I think it’s the old-fashioned way, through friends. And one of the advantages that people have of being this age is that they know how to do analog dating. They did it really, really well when they were younger, in the 80s, before technology, when people picked up the phone, when they knew how to do that human connection thing. Most of them know how to go on a date and have a conversation. They do know how to meet, and they did it awfully well in the 80s and all through the 90s!

You talk about a country enclave, “The Village,” in your book. How is dating in the suburbs different from dating in the city?
CB: It really, really depends on where you are. In a place like Greenwich, apparently it’s a dating hub. There are bars to go to and that sort of thing; but if you’re in a more secluded area, then you’re not dating. There’s a dearth. Maybe somebody will come up, but it’s the kind of thing where you can’t rely on the idea that you’re definitely going to have a partner in your future. The question becomes, Do I date at all? They’re not going to meet anybody that they particularly like—they’re not going to do just anything to be with a guy. They don’t necessarily need to.

You have a house in Connecticut and an apartment in Manhattan. How Carrie Bradshaw are you these days?
CB: Lately, I’ve spent more time in the city and go out more, even though I didn’t for quite a few years. It’s not the same as it was when I used to go out in the city, though. I’m not going to clubs. That was such a unique time in the 80s and 90s. Even if you do go out now, it’s not the same.

Speaking of Carrie, how involved were you with adapting Sex and the City to the TV series?
CB: For the pilot, which of course was done a year before the series came out, I read all the scripts, I went to some castings and was sent all the casting tapes and went to all the sets. Susan Seidelman was the director. There weren’t that many female directors then. It was very exciting. They asked, ‘What do you think of Sarah Jessica Parker?’ and I said I think she’s great. Darren [Star] says ‘great, we’re going to go and meet her.’ So Darren and I went to see Sarah Jessica Parker in Once Upon a Mattress. It was so exciting seeing her on Broadway. We went backstage and she was so cute. She had all these pictures in her dressing room of her family. And we went and had a Cosmo!

No fan can forget the lip-biting moment in the pilot when Carrie asks Big if he’s ever been in love and he answers “Absof**kinglutely” with his sexy smirk. Did that actually happen? Fact or fiction?
CB: Absof**kinglutely is directly what my Mr. Big said to me. Darren [Star] was really smart to pick that conversation out of the book. It’s kind of a turning point for Carrie’s life, like, whoa, she’s never been in love and she’s like f**k, what does that mean?

How close were the episodes to your real life?
CB: There were a lot of moments but, of course, they’re a little different. A lot of the first two seasons came from the book and directly from my life. Like “Valley of the Twentysomething Guys,” where Carrie’s staying at a younger guy’s apartment and there’s no toilet paper, and then he comes down and has this conversation about his crazy dream. That came from this guy who I interviewed for the column…he had a dream where he had these huge hands, but he was in an elevator called the Killavator. It was hilarious. I would just look at some of these guys and think, You are so nutso.

Is There Still Sex in the City? is in development as a TV series. How excited are you to write and executive produce?
CB: Honestly, what I’m looking forward to is just the process of creating the characters and the TV show. Right now I’m at the very beginning of the process—thinking about it and making outlines and notes. Like so much else at this time in life, it really is about being in the moment and being good with that.