Putting the chick(en) back in Chickahominy, Garden Catering on Hamilton Avenue has been rebuilt after being damaged in a fire. This favorite hub for chicken nuggets reopened in the spring with a new logo and a fresh look. “We’re setting the standard for what our stores could look like,” says Frank Carpenteri Jr., who is co-owner with his sister Tina, of the modernized decor. “As soon as we reopened, all of the regulars streamed back in. I grew up in this neighborhood and this is a special store for me.”

Frank and Tina’s father purchased the original Garden Catering in Old Greenwich in 1991, and they’ve expanded to seven locations with two in Westchester and others in Stamford, Norwalk and Fairfield. Though the menu now includes a grilled chicken salad, kale salad, as well all kinds of breakfast foods, hot and cold sandwiches and wraps, the number-one draw remains the seasoned chicken nuggets. GC’s signature sandwich is the Hotsy—a bacon-egg-and-cheese on a roll or wedge with chili made from the secret recipe of Frank “Hotsy” Bertino. Hotsy, a longtime employee at the flagship location, opened that store every morning at 4 a.m. into his early nineties and became a local food legend.

In support of charities and sports teams, Garden Catering hosts frequent “give-back nights,” where a percentage of sales goes to the cause; they are currently planning an event for Kids in Crisis and will donate 100 percent of sales.

As the name implies, the business does plenty of catering, too, with Tina Carpenteri overseeing corporate lunches, parties and barbecues. “We do everything but weddings,” says Frank. But, he adds, they have had frequent orders for post-wedding deliveries to clubs and venues around town. “When the party’s over, we bring in the nuggets and cones,” he says, smiling. “It’s fun comfort food.” 177 Hamilton Avenue, 203-422-2555; gardencatering.net 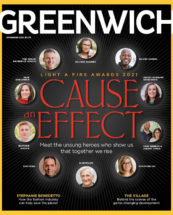