Neal and Kelly met during their freshman year at Franklin & Marshall College and became fast friends. Their mutual love of good food, fun and family made them fall for each other quickly. The couple dated throughout college, with Neal even visiting Kelly in Australia when she studied abroad. After seven years of courtship, Neal proposed ar sunset at Tod’s Point. Then they headed to Kelly’s parents’ home in Greenwich, where both families were waiting to celebrate. Reverend Jacky Gatliff officiated the ceremony at Stanwich Congregational Church and the reception followed at The Inn at Longshore in Westport.

The bride, daughter of William and Catherine Horn of Greenwich, graduated from Greenwich High School and Franklin & Marshall College. Kelly is a psychologist for Ridgefield Public Schools.

The groom, son of Gene and Carole Siegrist of Pennsylvania, graduated from Tulpehocken High School and Franklin and Marshall College. Neal works for Morgan Stanley in Manhattan.

The newlyweds spent their honeymoon on the Amalfi Coast before returning home to Darien. 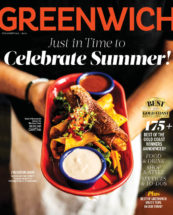