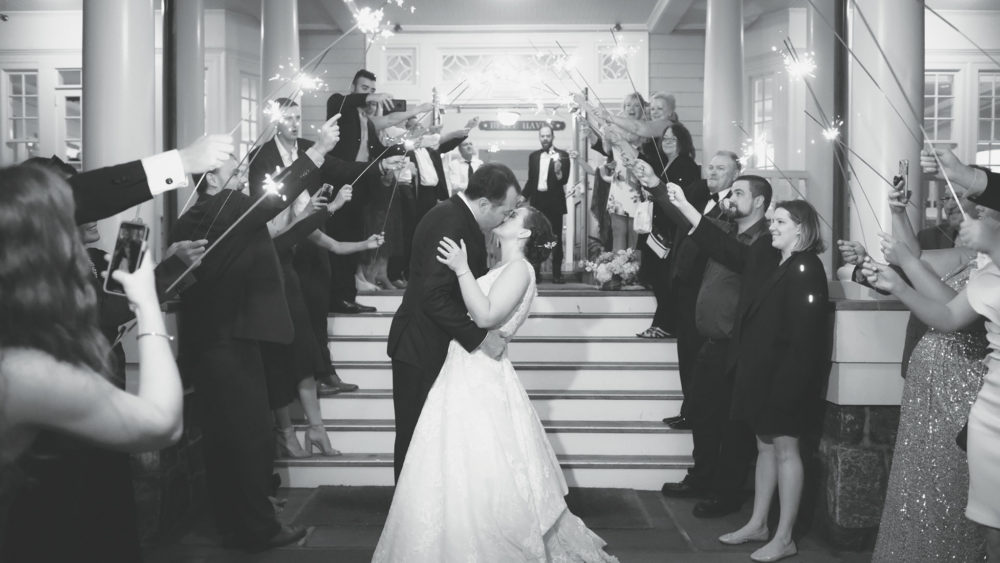 Laura and Frank’s love story began the first day they met and “saw the light.” After moving to Connecticut to open a workout studio, a mutual friend put Laura in contact with Frank, who was an electrician, to help with the buildout. The three meet up for lunch and a trip to the mall to get acquainted. While browsing, Laura noticed black track-lighting that she thought would be perfect for her studio. Frank also noticed lighting. The two locked eyes, shared a laugh and their future was bright from then on. After a few years of dating, Frank proposed.

The grooms uncle, Monsignor Sabia officiated at the ceremony at St. Catherine of Siena in Riverside, and the reception followed at the Belle Haven Club. It was an eventful day to say the least. After having a bad reaction to the raw bar during the cocktail hour, Frank quickly discovered that he has a shellfish allergy. His face swelled up, and the reception was delayed until the Benadryl kicked in and the EMTs gave him the go-ahead.

The bride, daughter of Michael and Audrey Laboissonniere of Rhode Island, graduated from Coventry High School, the University of Tampa and the University of South Florida. Laura is the owner of Club Sweat in Greenwich.

The groom, son of Salvatore and Elizabeth Sabia of Greenwich, graduated from Greenwich High School and the University of Connecticut. Frank is the manager for Sal Sabia Electric in Greenwich and co-owner of Club Sweat in Greenwich.

The two honeymooned in Italy (where they did not eat shellfish). They call Greenwich home.