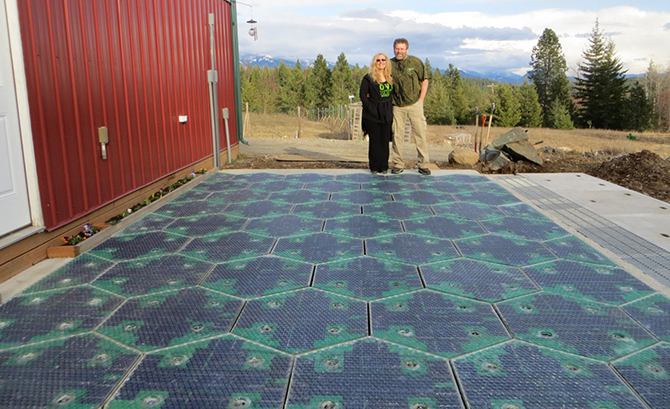 Solar panels are appearing on more and more houses in Connecticut. If you’ve talked to a satisfied solar proponent, they just love to show you that row of zeroes on the monthly electricity bill. Well, in summer, anyway.

Once you see that, you have to wonder about all those millions of houses in the sunbelt where the AC is cranking day and night. When is solar power going to catch on in this country? Germany, which has been on furious campaign for getting electricity from renewable sources, now gets fifty percent of its needs from solar.

One of the most innovative ideas to spring forth in this country is the Solar Roadway, the brainchild of an Idaho couple, Julie and Scott Brusaw. Their solar panels are hexagonally shaped and designed to snap together and form — get this — an actual roadway. The panels are three layers sandwiched together with a greenish glass top that they claim is suitable for driving on.

The criticisms came fast and furious, but the proposal is just startling enough to have earned them grant and venture-capital monies. If nothing else, it reminds us that a tremendous amount of land is taken up by roads in this country, and to use that space — even if it’s just parking lots at the mall — for the production of power would be an astonishing gift to the future.

The Brusaws suggest, for instance, that these panels could be engineered to provide roads that clear their own snow. Or the roads could panel the necessary streetlights and warning lamps.

Maybe the biggest obstacle to any of this happening is that the current Congress can’t even agree how to fund our asphalt highways and bridges. Here’s a hint for the Brusaws: Build a small Solar Highways factory in every congressional district. Your U.S. Representative will LEAP into action on your behalf.

Until then, we’re going to imagine how nifty these glass solar hexagons would look on the south side of the house. The driveway? Talk us to later.