Peter and Tayler met their junior year at Elon University after both were selected to represent Elon in a CFA (chartered financial analyst) case competition. Although the two had taken a class together sophomore year and were at the same Halloween party freshman year, they had never met.

The couple dated for five years. Peter proposed on his birthday in Chicago by Lake Michigan with a photographer hiding nearby to capture the moment. Tayler says he chose the date so he would never forget the day.

Pastor of St. Aloysius Parish in New Canaan, Robert Kinnally, officiated at the ceremony at St. Augustin’s Church in Newport, Rhode Island. The reception followed at Ocean Cliff in Newport.

The groom, son of Andy and Muffy Fox of Greenwich, graduated from Millbrook School and Elon University. Peter works for Coller Capital in Manhattan.

The newlyweds spent their honeymoon in New Zealand and Fiji. They call New York City home. 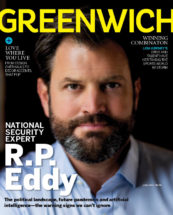