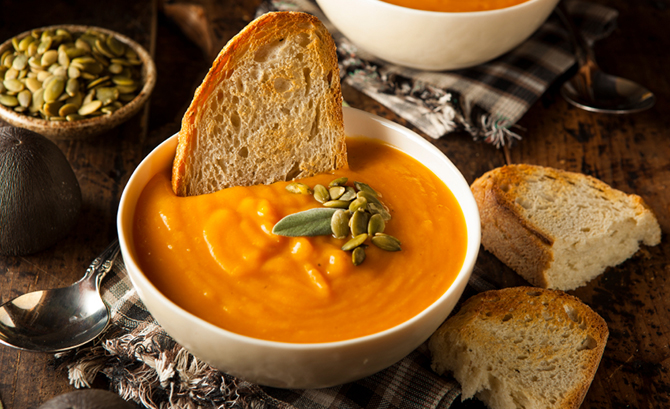 Preface your steak dinner at Blackstones with either their clam chowder, French onion soup or the Blackstones Lobster Bisque.

There are a variety of chilis to enjoy including Uncle Frank’s Chili, Cincinnati Chili with a hint of cinnamon, Veggie Chili, Smokehouse Chili with chunks of brisket and a  White Bean and Turkey Chili. If chili doesn’t quite tickle your fancy you can inquire about the soup of the day.

Seafood is at the forefront of the soups at Elm Street Oyster House, and diners can enjoy either their seafood chili or the Veracruzana Shellfish Stew with shrimp, scallops, calamari, mussels and little neck clams.

In addition to the soup of the day, Famous Greek Kitchen also features a Avgolemono soup which is a traditional Greek soup made with egg, lemon, chicken broth and rice.

Harvest serves two soups as part of their prix-fixe lunch and brunch menus: lobster bisque with melted leeks and black truffle, and a tomato gazpacho with heirloom tomatoes, spice and fresh herbs. The bisque is also available a la carte on the dinner menu.

Little Thai Kitchen features three Thai soups on their menu which are as follows:

Mediterraneo serves two soups, one of which is a shrimp and garbanzo bean minestrone with a spinach chiffonade, toasted cumin and lemon oil, and the other being a roasted butternut squash and apple soup with a pistachio gremolata and nutmeg crème fraiche.

Morello Bistro features a butternut squash soup with cream and molasses on both their lunch and dinner prix-fixe menus.

Rebecca’s has two decadent soups to try; the first is two soups in one bowl, which is a butternut and acorn squash soup with roasted chestnuts, and the next is an asparagus soup with lobster.

You can feel a little bit fancy when you enjoy the soup of organic tomatoes with semolina dumplings and basil at Thomas Henkelmann.