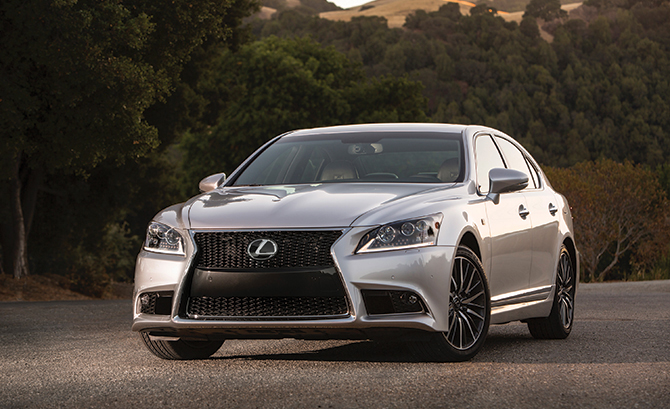 “What’s that?” demanded everyone who walked through my door during the week I had the Lexus LS 460 F Sport parked in the driveway. Smooth as an opal and black as sin, this was no comfy sport-ute Lexus. This was the chairman of the board sedan, awash in aggressive design touches and a miles-deep ebony paint.

The LS 460 occupies an interesting slice of the uppermost cruise-bomb market. Its German competitors impart an image of total seriousness, while the Lexus offers an air of serene silence and control, not to mention an unmatched reputation for reliability. The new F Sport version is meant to reach out to the serious drivers who would normally go for something Teutonic.

Falling easily to hand is a knob on the console that shifts the car’s performance from plush to sporty. The Adaptive Variable Air suspension firms up the ride, and the eight-speed automatic transmission encourages power, not thrift. After you’ve strafed a few scenic curves, the Lexus easily transitions back into its normal state of grace.

Whisper Jet was a term once cooked up by Eastern Airlines to describe some swanky airship. The term came back to mind as I piloted the Lexus around Connecticut’s byways. Some of the car’s rivals offer more screaming forcefulness, but this model’s 386 horsepower gets you going, although way too fast if you push that throttle. It silently builds up momentum like a falling boulder. The optional all-wheel-drive system lets you safely tap this power even during sodden seasons.

Our test car came with a saddle interior, a beautiful place to park oneself. All the high-tech, maximum-luxe features are here, of course. This car just calls out to you for long drives.

The LS starts around $76,000 and the F Sport edition adds another $10,000. If that’s too much, you could look at the slightly smaller ES 350, which was remodeled last year and now has the gorgeous interior we expect of a Lexus. But the customer targeted for the LS 460 won’t be bothered by such trifles. This is maximum-expression stuff that lets the world know you’ve arrived.